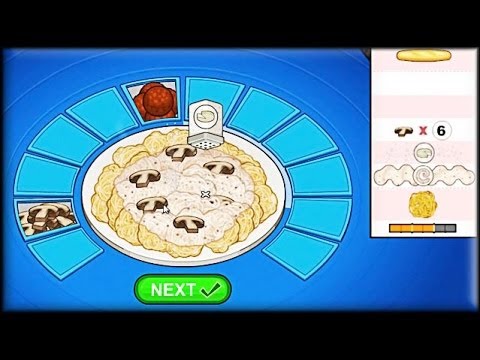 We’ve seen much of Papa Louie’s food branches taking over the fast food chain. And without stop, Papa Louie is back to lead the world of pasta here in Papa’s Pastaria. The goal you need to accomplish is the same as the other Papa Louie shops; to serve as a staff on the store and work there serving pasta. You have various stations to use; the cooking, build, and bread stations. Be sure to follow the customer’s order like choosing the sauce and the type of cheese. If the customer loved the pasta you’ve cooked, you will surely get loads of tips.

“`
Cooking is fun. Games are also fun. Therefore, cooking games are doubly fun. Papa’s Pastaria is exactly that, with the addition of giving you control over a restaurant and making (or horribly losing) money along the way.

At first glance, Papa’s Pastaria looks like another restaurant management game where all you do is take care of a bunch of numbers. Instead, you’re actively doing the cooking, mixing, and serving of all the dishes. Not to mention taking all of the orders.

The graphics are relatively simple, but rather well-done, vector graphics. They’re of better quality than most online games, but still nothing really exceptional. One thing that’s exceptional about the game though is the amount of character it’s able to get into the different sprites. Although they’re all just the same base with different parts swapped in and out, each element is drawn well enough to impart a great deal of personality to each design.

Where the game shines though, is in the gameplay. You’ve come into possession of a pasta restaurant, and it’s up to you to make money and satisfy all the customers. To do so, you’re in charge of the counter, the cooking, and the customers. The game is divided into different days, and within each day you’ll serve a certain number of people. A typical order starts out with, of course, you taking the order. This is represented by a certain character going up to the counter and placing an order which will be written down for you. The next step is to cook the pasta by moving to the cook station. There, you’ll have to select from a number (which will grow as the game goes on) of different pastas and boil them just right. After that, you’re off to the build station to add sauce, cheese, and other condiments as per the customer’s order. Once that’s done, you move to the bread station where you’ll add bread depending on the order.

Sure, it sounds simple, and it is indeed when you’re limited to a single customer. You’ll soon get multiple orders at the same time though, and it’s up to you to manage the orders, cooking, and serving as efficiently as possible. How well you do will affect how much money you get in tips, and how high your customer rating gets.

So go on and give it a try, Papa’s Pastaria is your chance to fulfill that lifelong dream of owning and running a restaurant!

The road is getting dark The rain is falling in melancholy By the lonely window pane, I'm singing this sad song Why have you been away for...